Royal Flush for Everyone

"Ohhhhhhhhhhhh!!!!" we heard from Table 38 in the Silver Section of the Brasilia Room.

Now, in the Main Event, yelling and cheering is common, even for regular occurrences, but this was different. When we looked over to the table, all but two players - the ones in the hand - had their cameras out, taking a picture of the board. Even a massage therapist paused to reach for her smart phone and capture whatever it was that had the entire table gushing.

When we finally arrived, their were two players heads up on a board of

. Yes, there was a royal flush on the board. One player moved all in, and the other called.

, meaning they both turned flushes as well, but the gentleman with the deuce of hearts was fortunate enough to chop.

The dealer held the board for a few more pictures, then finally washed the cards and began riffling in preparation of a new hand.

"I shuffled too!" the dealer made sure to say. 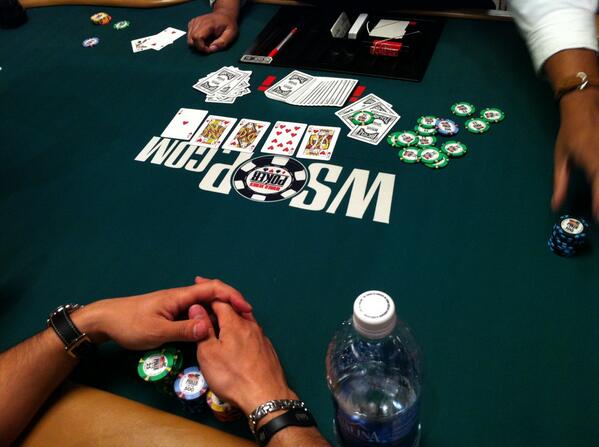