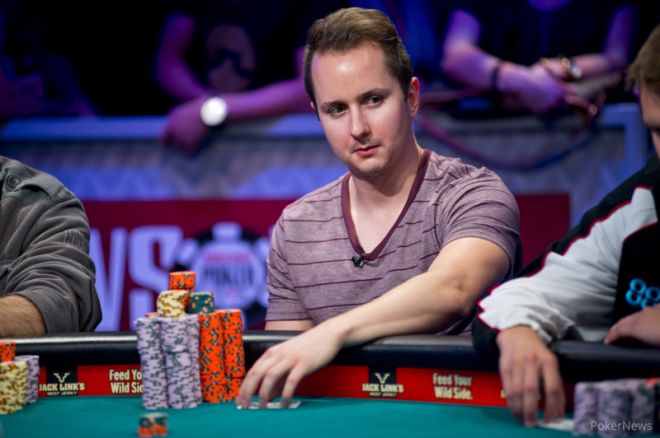 Over the next week, PokerNews will be taking a brief look at each member of the 2013 World Series of Poker November Nine. We’ll be moving around the table in seat order, and here’s a quick recap of the players we’ve covered thus far (click each to see their article):

They say the 2013 World Series of Poker was the “Year of Canada” thanks to citizens of that country winning 10 gold bracelets. The country was also well represented in the Main Event with five Canadians advancing to Day 6, though only one—Marc McLaughlin—made the November Nine.

A 25-year-old tattoo artist from Brossard, Quebec, McLaughlin is looking to capture the 11th bracelet for his county and become the second French Canadian World Champion behind Jonathan Duhamel, who won the Main Event in 2010. McLaughlin has played the Main Event the past five years, and before making this year’s final table he managed to cash in two of them—30th in the 2009 Main Event for $253,941 and 86th in 2011 for $76,146. McLaughlin had another big score in 2011, finishing third in Event #32: $1,500 No-Limit Hold’em for $292,634.

McLaughlin recently revealed in an interview with canadapoker.com that he intends to seek the advice of the former champ Duhamel. “Jonathan will surely help me in dealing with my final table and the ‘fame’ that comes with it,” McLaughlin explained. “I need his advice about what will be going on with the media and everything related to it, because I simply have no idea. I am not a person who seeks the spotlight at all, so I will have a little work to do.”

McLaughlin, who enjoys playing soccer and is supported by his long-time girlfriend Laurence Grondin, played Day 1b of the Main Event and worked his starting stack of 30,000 up to 45,300. On Day 2b, he ran that up to 154,600 and continued to increase that up to 6.695 million by the end of Day 5. That made him the second-biggest stack in the tournament, and while he would have no doubt liked to hold the chip lead, perhaps it’s a good thing he didn’t considering none of the end-of-day chip leaders from the Main Event ended up making the November Nine!

McLaughlin’s stack of 26.525 million puts him third in chips at the final table, and he’s actually sandwiched between the two bigger stacks, who also happen to be the two most accomplished tournament players at the final table. McLaughlin has an aggressive style, so he’ll likely be able to make a move or two against the tighter Amir Lehavot, on whom he has position. On the flip side, chip leader JC Tran is to McLaughlin’s direct left, and if there’s anyone more aggressive and willing to mix it up than McLaughlin, it’s the two-time bracelet winner. Between the three of them, there ought to be some fireworks and it wouldn’t be at all surprising if one of them fall in the early stages of the final table.

It’s hard to say how poker fans will receive McLaughlin. It’s a well-known fact that the French-Canadians like to party—just ask Duhamel and Marc-Andre Ladouceur—and they’re known to be quite confident, which can be construed as cockiness. One thing’s for sure, the Italian contingent at the WSOP didn't think much of McLaughlin as they started to maliciously call him “Retardo No Foldo” on Day 7.

For more on McLaughlin, check out the interview he did with PokerNews’ Kristy Arnett:

To review the 2013 WSOP Main Event live coverage, be sure to check out the tournament page in our live reporting blog. As always, get all the latest PokerNews updates on your social media outlets. Follow us on Twitter and find us on both Facebook and Google+!

Get the latest poker news, poker strategies, and special offers sent directly to your inbox.

+ Get the Ultimate Beginner’s Guide to Texas Hold’em - FREE!